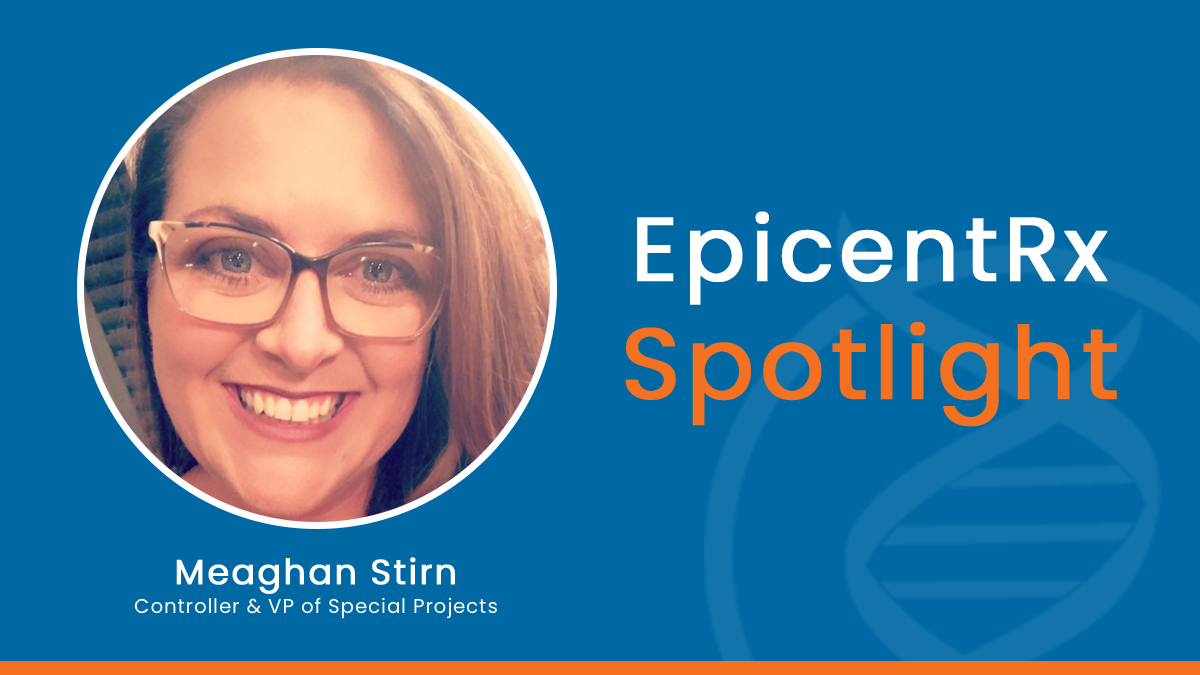 Meaghan Stirn, about whom we have written this deservedly fulsome profile, is highly intelligent, extremely intuitive, and the company is beyond lucky to have her in its employ as Controller & Vice President of Special Projects.

But let’s be clear: intelligent and intuitive though Meaghan is, she’s still no Einstein. Not by a long shot. That moniker belongs to her dog, a 150 lb. 10-year-old Great Dane with long, long legs (we suspect that ‘Eine’ is actually a horse masquerading as a dog or, even quite possibly, Shaquille O’Neal masquerading as one) who was named after Dr. Emmett Brown’s pet sheepdog in the sci-fi blockbuster, Back to the Future. FYI Meaghan usually shows up bright and early to the office in a Jeep Cherokee but, in a pinch, if necessary, could probably also ‘ride’ her dog there from her home in Slobber City on the outskirts of San Diego, California. (Random thought —could we use Meaghan’s profusely drooling Great Danes to replenish the reservoirs out West? The message here to unite behind is don’t hate, salivate. Also, it’s cool to drool.) 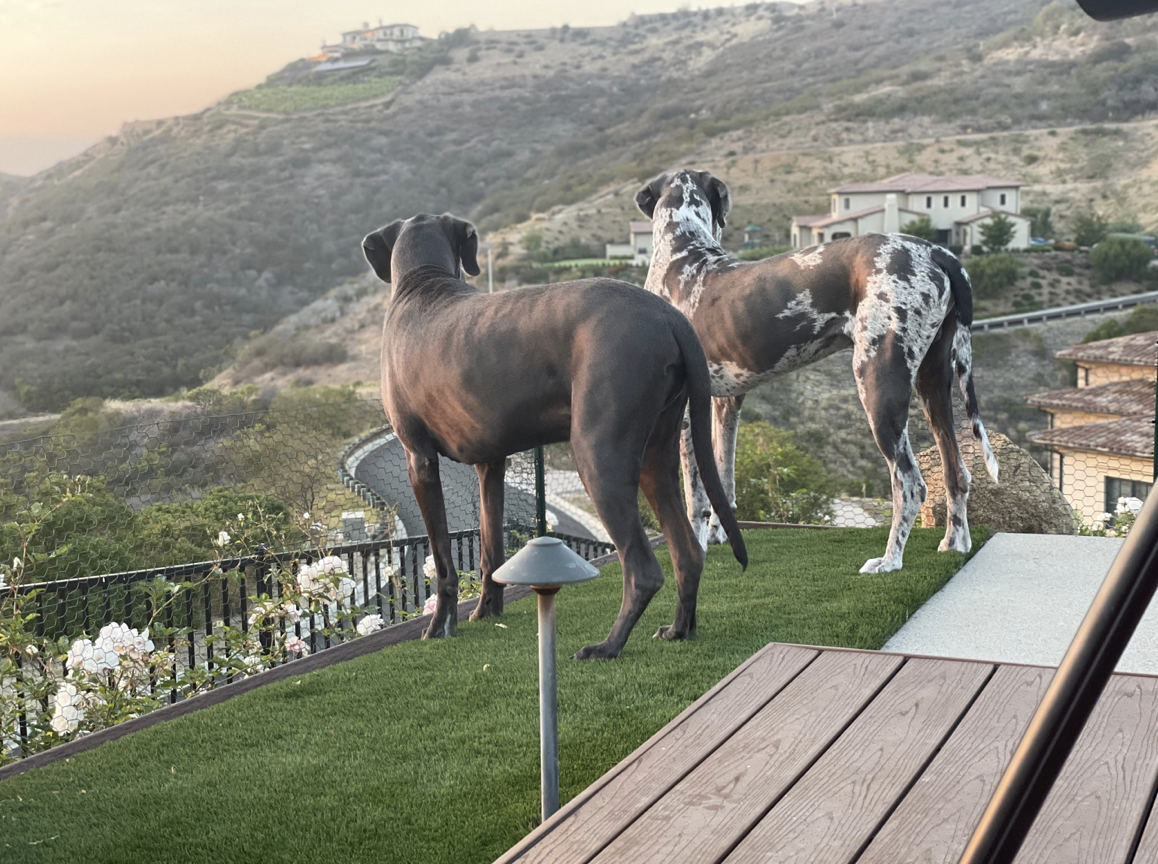 Size is Relative: The Great Danes, Einstein and Wrangler

Right off the bat, that tells you a lot about who Meaghan is and what she stands for, which is just a little taller than her dogs—she has two Great Danes. It bears mentioning that Meaghan, being a very nice and compassionate person, probably won’t eat your lunch but, if given half a chance, her dogs certainly will—see below for how many cups of kibble they consume in one month.

(Spoiler alert: it’s a lot) What immediately jumps out is not her dogs (they’re too big to really jump or leap and usually even too hot to trot) but her impeccable taste in a) movies – Back to the Future being one of the best-made movies of all time – and b) husbands considering that it was her spouse, Scott Stirn, a physical chemist, who actually chose the name, Einstein. And from extensive personal interaction with him, we can confirm that Scott Stirn is a great guy—and a big one, standing at least 6’2” and around 250 lbs, which is probably necessary to maintain alpha status with two stomach-rumbling Great Danes. Also, hats off to the fact that Scott is a physical chemist, meaning not that he is physically active, although Scott regularly lifts weights and runs, but that he practices a discipline, which marries the fundamentals of physics with chemistry. We are not too proud to admit that physical chemistry was one of the hardest courses we have taken or will ever take. 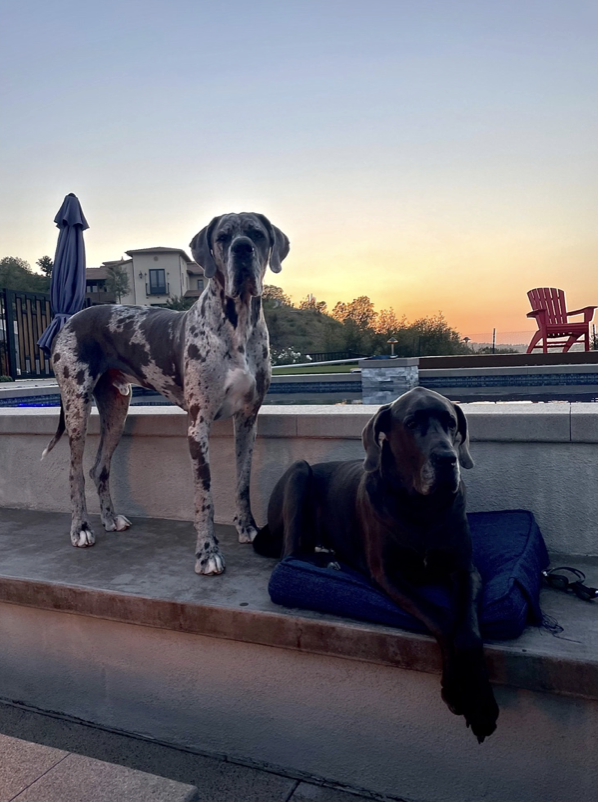 Second, Meaghan is a ‘fixer’ who cleans up messes that are dog-made (Great Danes are famous for their destructive ‘bull-in-a-china-shop’ clumsiness toward vases, tables, chairs, Lego cities, treasured family ornaments on Christmas trees, and even small children) or man-made. Her mysterious title, “Vice President of Special Projects” is really a euphemism for ‘fixer’ since at work, like at home, she cleans up messes, ties up loose ends, and makes problems disappear, not in an ominous way like some gangster Ray Donovan-esque movie fixer, but in a much-appreciated helpful one, which is the reason that every single EpicentRx employee has her number on speed dial.

This makes sense because she is a true veteran of drug development, having formerly worked as a study coordinator and project manager-cum-budget administrator at the University of California at San Diego (UCSD) for many years prior to her employment at EpicentRx. In that capacity she has seen and dealt with issues connected to drug manufacture, quality assurance (QA), clinical site management, clinical research organizations (CROs), budget irregularities, protocol deviations, etc.—you name it she’s handled it. Just ask CEO, Dr. Tony Reid, who brought her with him to EpicentRx from UCSD as his key lieutenant/consigliere and all-around fixer.

Third, she is budget conscious, by necessity, since Einstein and his younger brother, Wrangler, a 3-year-old, 170-lb Great Dane, (yes confirming that there are two of them and that their initials are W & E as in WE are ALWAYS hungry and that’s why WE slobber and drool soooo much, yes, WE do, now FEED us) consume more than 400 cups of food each month. Perhaps in recognition of this fact and at the insistence of CEO Dr. Tony Reid, who has always recognized her potential, Meaghan went for and received an MBA with a focus on financial accounting and auditing from National University. This explains the “controller” part of her job title.

Fourth, like Einstein and Wrangler, she is a loyal and good friend, always quick to lend a helping hand (or paw), as every single EpicentRx employee will attest to. Meaghan is also a fierce patient advocate over and above her intense attachment and loyalty to the company. Out of deep sympathy for patients and their families, she consistently holds EpicentRx—and clinical sites— to an even higher standard in terms of their responsibility for patient care and safety on the clinical trials that they oversee.

Finally, we are hopeful that this profile is free of errors. But, if not, we are confident that our stalwart ‘Controller & Vice President of Special Projects’ will fix them.