On June 3, 2022, at 11 a.m., EpicentRx’s Chief Development Officer Bryan Oronsky and Senior Director of Operations and Corporate Development Scott Caroen traveled from Northern California. There, temperatures are moderate, even in the summer.

But then they touched down in Scottsdale where temperatures are immoderate — especially in the summer.

Outside on the tarmac, it was so skin-meltingly hot that drivers of tugs, fuel trucks, baggage carts and other airport vehicles wore gloves and oven mitts to protect themselves from the heat of the steering wheels. In the foreground was Camelback Mountain, its dromedary outline an unsubtle reminder about the importance of adequate hydration in this unforgiving desert climate.

Fortunately, however, the Westin conference hall was comfortably air-conditioned, notwithstanding the warmth and excitement that emanated from the crowd of conference attendees. They gathered to hear about the effects of RRx-001, an anticancer agent with antioxidant and anti-inflammatory properties, on non-alcoholic fatty liver disease — or, “NASH.” The intensity of their interest was related to the magnitude of the unmet need since NASH, the complications of which include cirrhosis and the development of liver cancer or hepatocellular carcinoma (HCC), is currently untreatable.

EpicentRx presented data demonstrating that RRx-001 significantly reduced the development of fatty liver disease in groups of mice that were fed a high-fat diet compared to groups of mice fed the same diet, but without RRx-001. The mechanism of these lipid-lowering effects is thought to be related to direct inhibition by RRx-001 of the NLRP3 inflammasome, large proteins, which trigger inflammation coupled with activation of Nrf2, a master antioxidant switch. 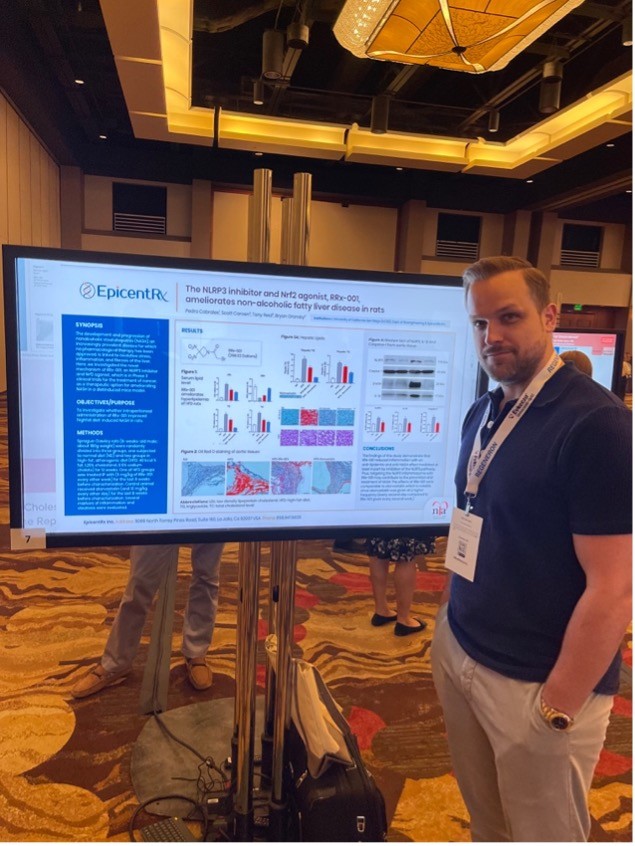 Following the NLA presentation on RRx-001 and NASH, Bryan and Scott traveled to the Biodesign Institute (BDI) to visit Drs. Cheryl Nickerson, Jennifer Barilla and Jiseon Yang on the Arizona State University campus, unofficially kicking off a collaboration between the Nickerson Lab and EpicentRx for the study of RRx-001 in space. The health risks of spaceflight from exposure to radiation and altered gravity are considerable, necessitating the development of therapeutics, potentially like RRx-001, to mitigate them — especially with crewed missions to the moon and Mars planned for as soon as the 2030s.

However cold space is, with a temperature just above absolute zero, the Nickerson Lab is the exact opposite. Drs. Nickerson, Barilla and Yang radiate such extreme warmth, energy, enthusiasm, friendliness and passion for space that it is impossible — literally impossible — not to leave energized, inspired and wholly engaged. The energetic Dr. Nickerson, whose need for speed leads her to race souped-up American muscle cars and whose office is filled to the brim with personal astronaut mementos and memorabilia from her work with NASA and the International Space Station, sets the tone for the rest of the lab.

At the end of the day, Bryan and Scott left for the airport, energized and excited in anticipation of the next conference and the potential of the collaboration with the Nickerson Lab.