ASCO and EpicentRx on the Go

In June, EpicentRx was truly “on the go,” arriving at ASCO in Chicago directly from Scottsdale, Arizona where the company just one day prior presented data on the lipid-lowering effects of its small molecule, RRx-001, at the National Lipid Association (NLA), hence EpicentRx’s Senior Director of Operations & Corporate Development Scott Caroen traveled to both states for these back-to-back conferences.

In terms of acceptance notices, this has been a banner year for EpicentRx with an oral presentation at the American Thoracic Society (ATS), posters at the NLA, these June events, and more to come in the fall.

The ASCO abstract/poster presented positive results from the randomized Phase 2 PREVLAR study (ClinicalTrialsIdentifier: NCT03515538) where small molecule, RRx-001, was given as an anti-mucositis agent in combination with standard-of-care cisplatin and intensity-modulated radiation therapy (IMRT) in first-line head and neck cancer. These positive results include a dramatically decreased incidence and duration of severe oral mucositis (SOM) as well as increased time to onset of SOM with RRx-001 + standard care compared to standard of care alone. Severe oral mucositis is a devastating and debilitating complication of head and neck cancer treatment for which no approved treatment is available. SOM impairs swallowing and hinders nutrition, requiring the use of powerful analgesics and the reduction or withdrawal of chemoradiation, which predisposes patients to a higher risk of cancer recurrence and death.

The lead presenter was top enrolling Principal Investigator (PI) from Ohio State on PREVLAR and first author on the abstract/poster, Dr. Marcelo Bonomi. In addition to the anti-mucositis effects of RRx-001, and of particular interest to the attendees that took the time to visit the poster was the single agent anticancer activity, which RRx-001 demonstrated prior to the start of chemoradiation, as confirmed by Dr. Bonomi. (See Figure 1)

This sets RRx-001 apart from other anti-mucositis agents in development that may (or may not) effectively protect the tissues of the mouth and throat but are generally not, at the same time, also toxic to tumors. These dual properties of RRx-001 are related to the presence of hypoxia or low oxygen, a hallmark of most tumors if not all. When hypoxia is present, RRx-001 undergoes fragmentation, like a prodrug, leading to the local release of toxic metabolites that eliminate cancer cells. In contrast, the protective effects of RRx-001 are related to its inhibition of NLRP3, a protein complex, which is known to kickstart the inflammatory process that damages normal tissues and exacerbates or worsens oral mucositis. (See Figure 2 for a simplified illustration of the two-part mechanism of RRx-001 in tumors and normal tissues)

Based on the positive results from PREVLAR, a follow-on late-stage oral mucositis trial with RRx-001 in first line head and neck cancer (called KEVLAR) is planned prior to the start of a registrational Phase 3 clinical trial.

EpicentRx continues to remain “on the go” with a hectic schedule that includes more conferences during the fall and winter. 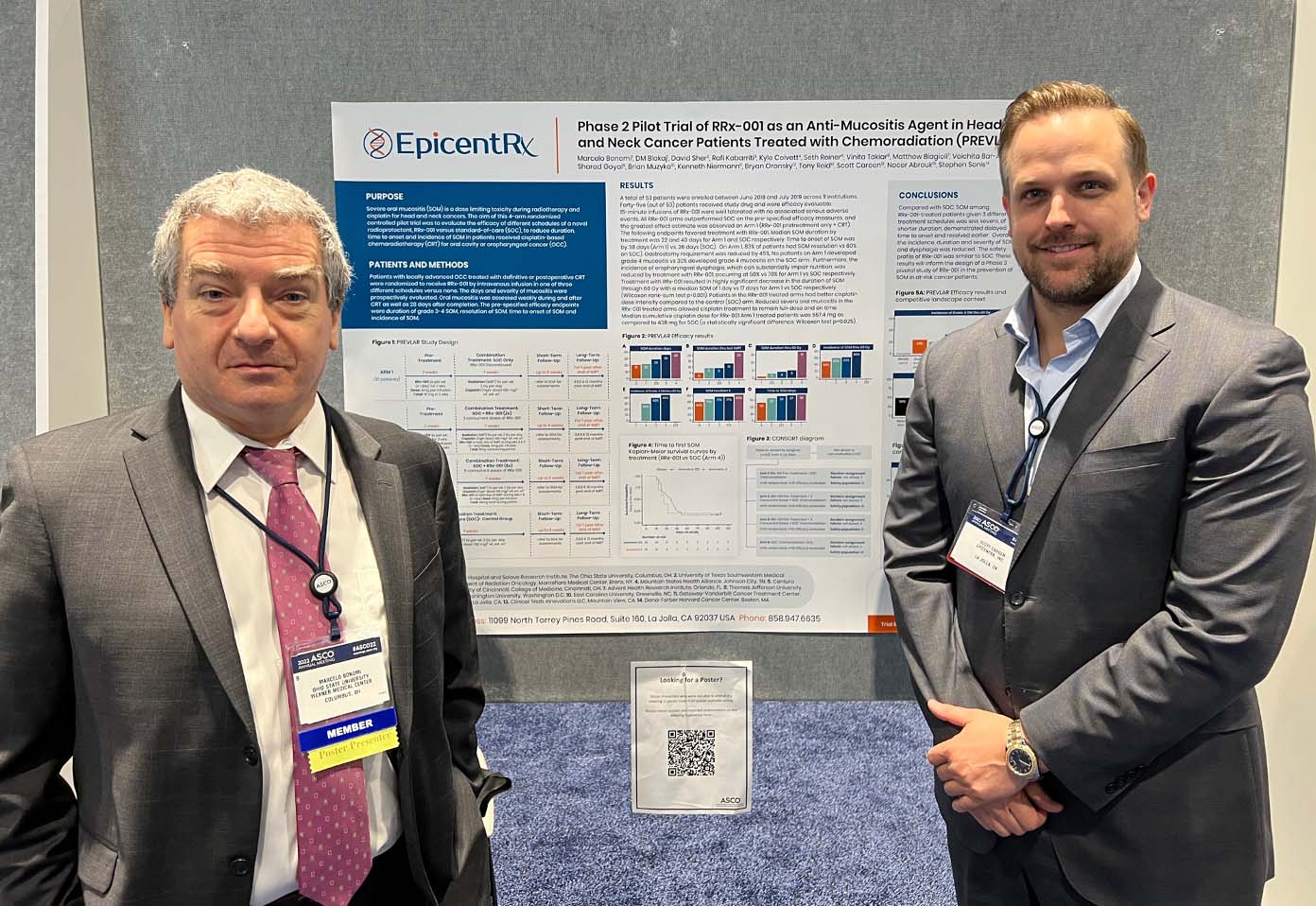