A Tribute to The Michael J. Fox Foundation for Parkinson’s Research and Shake It Up Australia Foundation

A recent email from The Michael J. Fox Foundation for Parkinson’s Research (MJFF) to research partners included a quote from Michael J. Fox himself in which the actor, optimist, and recent Oscar Jean Hersholt Humanitarian Award winner, referred to Parkinson’s disease (PD) as “the gift that keeps on taking.” Accepting the recent honorary Oscar, Michael candidly shared: “I’m so grateful to all of these people and thousands more who will make this world without Parkinson’s a reality. I’m not sure I communicate it well, but it is humbling in the deepest way to stand here and accept your kindness and admiration, when truly the effort is being driven by others so deserving of this attention. I’m grateful to them and to you because my optimism is fueled by my gratitude. And with gratitude, optimism is sustainable.” (View the full speech here)

We are humbled by Michael’s words and vision for a world without Parkinson’s. In 2022, EpicentRx received a grant from the MJFF and Shake It Up Australia Foundation (SIUAF) to study our investigational treatment, RRx-001, in Parkinson’s disease. MJFF and SIUAF have collaborated as partners and have funded this area of research studying inflammation led by Dr. Richard Gordon.

RRx-001 is an NLRP3 inflammasome inhibitor and Nrf2 activator, two mechanisms that are responsible for its anti-inflammatory and anti-oxidative properties, respectively. The NLRP3 inflammasome is a series of proteins that, upon activation, kickstart and perpetuate the inflammatory process. Therefore, as an inflammasome inhibitor, RRx-001 prevents or reduces inflammation. Nrf2 is a protein, which activates other proteins that protect against free radicals or oxidative damage. The fact that RRx-001 potently increases the activity of Nrf2 makes it an antioxidant. RRx-001 also crosses the blood brain barrier (BBB), which otherwise walls off the brain from the rest of the body. The antioxidative, anti-inflammatory, and brain penetrant properties of RRx-001 are what makes it potentially well suited to treat PD and other neurodegenerative diseases.

To date, PD has defied all attempts to prevent or cure it. A key—and perhaps the key, as we have come to believe — to the complex jigsaw puzzle of PD is chronic inflammation, a contributor in many diseases, including neurodegenerative ones like Parkinson’s and others. If we’re being really literal, a gift that keeps on taking describes inflammation to a T—or a T cell anyway because it is the inflammatory T cells, macrophages, and neutrophils, which eliminate and neutralize microorganisms in the short term, making inflammation a gift of sorts, but that in the long-term damages normal tissues. The damage results from “friendly fire” as these revved-up immune cells go on the attack with the indiscriminate release of a toxic mix of reactive oxygen species, inflammatory molecules, and protein-destroying enzymes. In the case of PD, some of this damage occurs in part of the brain that controls movement through the release of dopamine from neurons, as shown in Figure 1 below. Damage in this region leads to development of the hallmark motor symptoms of PD which are resting tremors, stiff muscles, shuffling gait, impaired posture and balance and other motor issues.

Figure 1: Dopamine levels in a normal and Parkinson’s affected neuron 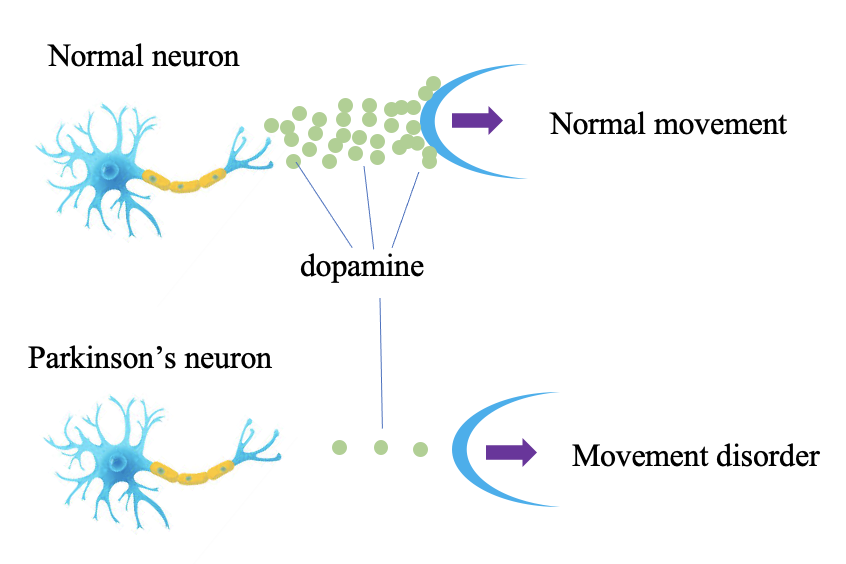 In the presence of excessive inflammation, and free radical damage

We salute and thank MJFF and SIUAF for their invaluable advocacy, which makes the evaluation of RRx-001 in PD possible. For too long, as Michael J. Fox points out, Parkinson’s disease is the “gift that keeps on taking.” Now with the help of MJFF and SIUAF (the largest non-government source of funding for PD in Australia) it’s time to give patients around the world something back: hope.